Tourism is booming beyond the major capitals of Western Europe, and you can fuel your Champagne tastes and live like the 1 percent for a song in these three deeply discounted destinations. See a sight or two in the capital cities and then make your way to the hidden treasures in outlying areas. Follow along as we circle the globe to three budget countries on three continents.

If you’ve always wanted to hang with the jet set on the sun-drenched beaches of the Greek islands and Spain’s Costa del Sol or explore the canals of Venice and the Seven Hills of Rome, you can experience it all in Western Europe’s budget destination on the Iberian Peninsula.

You’ll land in Lisbon, Portugal’s capital city built on the banks of the Tagus River and its seven hills. Lisbon has transformed itself into a modern city while embracing its rich history. The walking city offers breathtaking views around every corner from the tree-lined avenues to the crooked, cobblestoned alleys. You can’t help but get caught up in the food, drink, laughter and life on the streets.

If you have time to see only one sight in the Lisbon area, make it the 19th-century Palácio Nacional da Pena, one of the Seven Wonders of Portugal. After your palace visit, it’s time to splurge on a sunset cocktail at the Park Restaurant and Bar, a hidden jewel of a rooftop garden with a splendid view of the Targus River, popular with the locals for its view and its music. 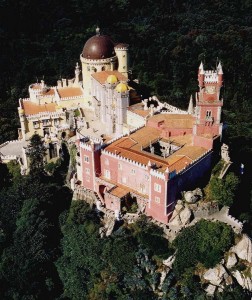 Feast your taste buds on a local specialty at an outdoor café. My favorite is chicken piri piri, a grilled chicken with a spicy sauce, served with a heaping side of french fries—best enjoyed at an outdoor café. Beware the innocuous-looking sauce—sample before applying liberally or you might end up drinking a carafe of wine (straight from the carafe as I did) to put out the fire. To come away from a memorable meal is to have a pitéu. End the evening by catching a Fado, the

authentic folk song of Portugal, raising a glass of Port, and joining the locals in the traditional folk dance.

The Beaches of Portugal

For two hours and $25, take the train north from Lisbon to the coastal town of Aviero. Known as the “Venice of Portugal,” crisscross this picture-perfect city through its canals in a gondola as you pass brightly colored buildings and azulejo panels that depict the history and culture of the area on ceramic tilework. See more of the city on a free bicycle “rental” at one of the BUGA shops. Then, hit one of the pristine beaches along the Silver Coast.

Expert surfers can stop in Nazaré on the way to Aviero to navigate the world’s largest waves while mere mortals soak up the sun and watch the surfers perform the dance of their lives.

Head south along the coast from Lisbon to the Algarve region by train for a three-and-a-half hour ride (under $30). Here you‘ll find dramatic cliffs and whitewashed beaches, cobbled streets, olive and orange groves, and a full complement of water activities on the beaches. If you’d rather pass on surfing and jet skiing, you can explore bridges, castles and monuments or play a round of golf. Top off a fresh seafood dinner along the beach with some local “Firewater,” Aguardente de Medronhos, something akin to a strong fruit brandy. Be sure to ask for a side of water. 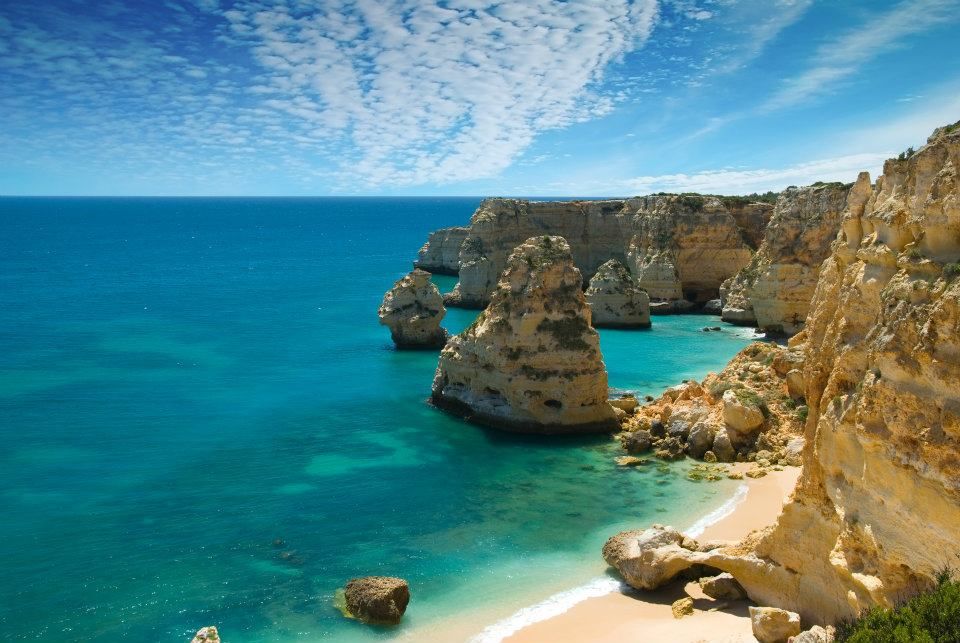 Easily accessible from Miami and Fort Lauderdale, start your visit to Ecuador in Quito, the capital city with a European flair. Stay in one of the elegant, historic hotels for under $50 a night. Start your tour of the city with a morning ride on the teleferico (sky tram) to the top of Cruz Loma where panoramic views of the city, the snowcapped mountains and Pinchincha volcano await you. Back in Quito, explore the colonial architecture, Plaza Grande and Monastery of San Francisco in Old Town. 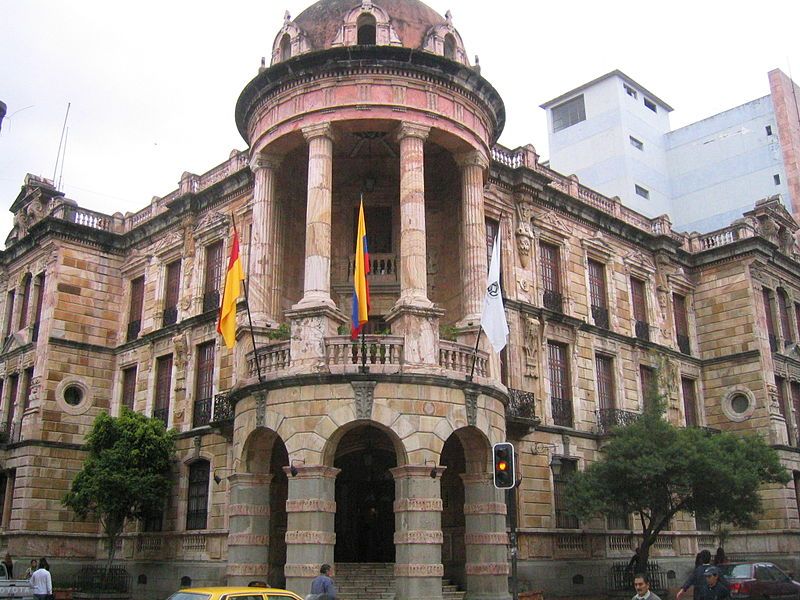 Known as the cultural capital of Ecuador, Cuenca sits high in the Andes. If you blink your eyes and click your heels, you’ll swear you’ve landed in Rome. The city is built around four rivers, and everyone in the know walks in Cuenca; to drive is to take your life in your hands.

Parque Calderón, in the heart of the city, is the best place to rest and spend time people watching. Wander through the flower market before stopping at Tutto Freddo, the preferred ice cream purveyor of locals, visitors and expats. Take a carriage ride through Paradise Park in the afternoon. Coy, Ecuador’s national meat and frequent restaurant specialty, is guinea pig—it comes highly recommended. After dinner, join a street festival, catch some live music or attend a free cultural event. 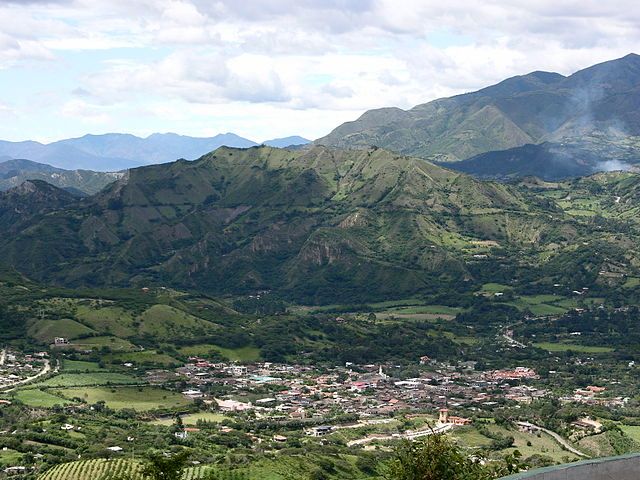 Vilcabamba, known as the Valley of Longevity, lies four hours to the south of Cuenca in the foothills of the Andes. The idyllic Izhcyluma Hostería and Spa offers doubles with private baths for under $40 a day as well as daily shuttle service to and from Cuenca for $15. Wander the lush flower gardens, take a free yoga class, hitch a ride on a horse, indulge in a spa treatment or relax around the pool—all while marveling at more panoramic views and soaking up the magical atmosphere. Even Type As can’t help but relax until they discover the free Wi-Fi access. There’s plenty to do at Izhcyluma and in the area, but don’t plan to do anything. Let your time there take on a life of its own.

For a colorful vacation, turn your eyes toward the East and head to India. With the Rupee at nearly 64 to the dollar, India is on sale at half its usual budget price.

Most international visitors fly into Delhi, the capital city and sprawling metropolis that encompasses New Delhi.

India is a huge country, so if it’s your first trip, explore the Golden Triangle on a guided tour, which runs around $100 per day inclusive. I never (say never) recommend tours, but India is not a country you want to see on your own as a first-timer. If you have your own ideas about where you want to go, it’s easy to design a custom tour.

The Golden Triangle journey begins in the chaos of Delhi as you weave through the streets touring the colonial buildings, bustling bazaars, and majestic temples and mosques.

Then it’s off to Agra to the south, home of the Taj Mahal, the magnificent, white marble mausoleum that houses the favorite wife of 17th-century Mughal Emperor Shah Jahan and the 11th-century Agra Fort. 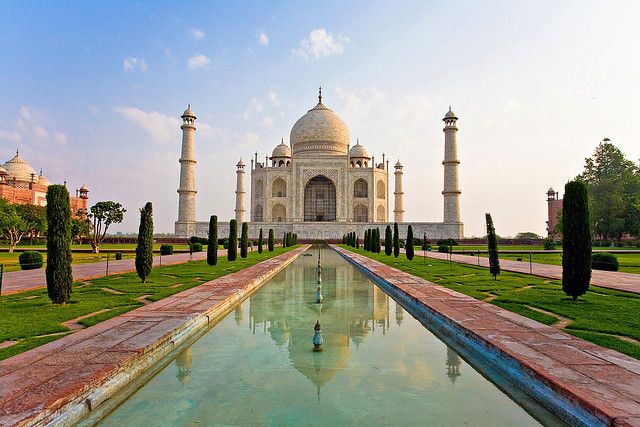 In Jaipur, you’ll visit the finest specimen of Rajput architecture, Hawa Mahald, of red and pink sandstone with its unique honeycomb structure. 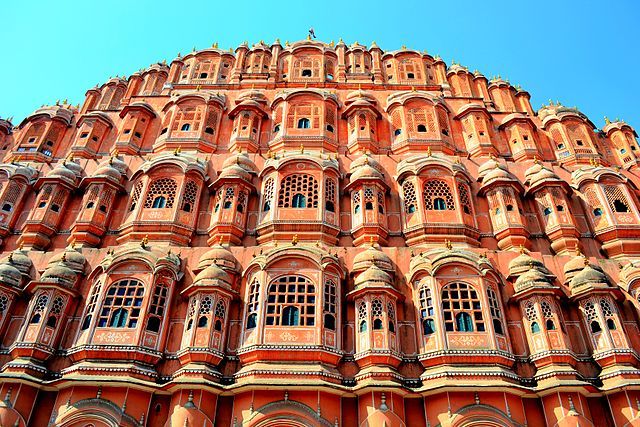 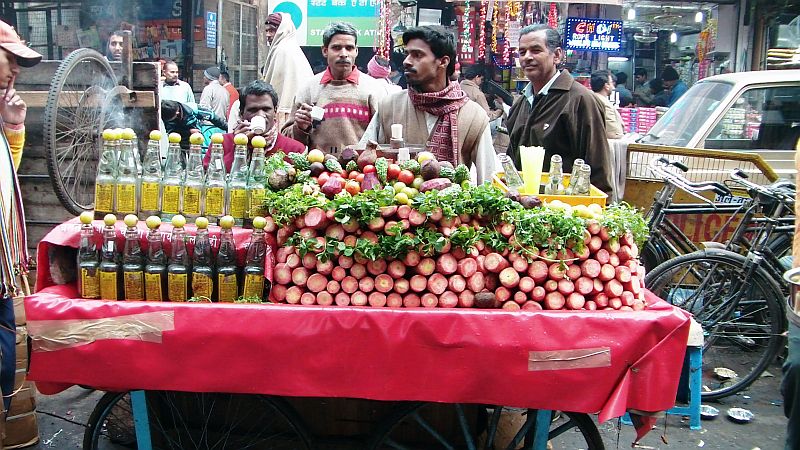 If you plan a few extra days in Delhi before or after your Golden Triangle adventure, book a food tour. To experience the food of India is to experience her people and culture, but don’t make the painful assumption that even experienced travelers make—that the spices in Indian food will keep you safe. A food tour is the safest way to sample the flavors of India.

The food tours have been described as an “Anthony Bourdain adventure,” with tour guides leading you by rickshaw and car while you eat your way through the city under the experienced eye of your guide. In addition to getting an intimate view of life in Delhi, your tour guide will explain where and how to eat safely for the remainder of your trip. Take the advice.