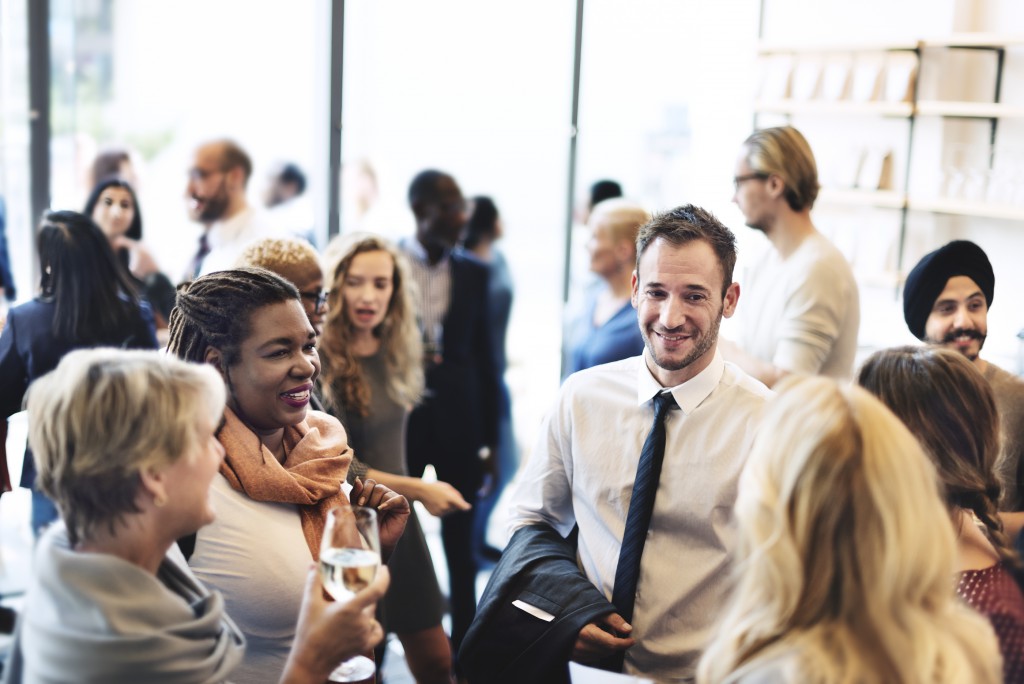 Networking is what you make of it—it can raise you to new heights, or it can destroy the efforts of your entire career in the blink of an eye. It can build trust, or it can earn you the label of “untouchable.”

We’ve been networking since the Industrial Revolution made it possible for us to leave our hometowns and scatter across the country. Traditional meeting venues such as local Chambers of Commerce functions, service clubs and golf courses have always provided opportunities for members of the “boys club” to connect, but networking for mere mortals launched from an unlikely source.
The Madness of Networking
Jerry Rubin, of Chicago Seven fame during the 1968 Democratic National Convention, had a capitalist epiphany during the 1970s, and he became an entrepreneur. During the 1980s, the Yippie-turned-Yuppie found a way to turn a profit from Studio 54’s Wednesday-night dead time.

As you view Jerry Rubin’s card, note the two draws—Studio 54 and “dancing.” First-timers came for the wall-to-wall action—to get a glimpse into the world of the glitterati that littered the notorious disco on the weekends. In the early days, it was a place to see and be seen, and to fill a calendar for the upcoming weekend.

I went on a borrowed business card, and it was the closest I ever got to the “real” Studio 54. Once was enough. Thousands of people crammed onto a disco floor on the pretense of making business connections was not my idea of fun, and I had no need of networking at the time.

Rubin was a sharp businessman, and the networker of all times. He created a database from the business cards required for admission. Those names helped him build a vast downline when he entered the world of network marketing.

The Magic of Networking
Thanks to Rubin’s vision, networking has evolved to become the lifeblood of businesses, entrepreneurs and solopreneurs. Further, it has evolved from contrived to organic. During the 1990s, bulletin boards, email lists and forums on Prodigy, AOL and CompuServe connected people with like interests. Lasting business contacts and friendships were formed because people joined groups that reflected their interests. Those who participated the most gained the most benefits.

Today, nearly 250,000 Meetup groups bring together more than 25 million like-minded people, and LinkedIn is the meeting place of choice for more than 400 million businesspeople. Efficient networkers have learned to target their efforts by joining groups within LinkedIn—an update to the forums concept of the 1990s on a newer platform.

It’s important to hone your skills at networking events before attending company and industry conferences, tradeshows and conventions. The same holds true for educational seminars and workshops. You never know whom you might meet and what opportunities could cross your path at these extended events.

It’s not rocket science to find a way to connect, but it’s an art form when practiced properly.

The Golden Rule of Networking
To reap the greatest rewards, pay it forward. Give more than you receive.

Start by reversing, “What can you do for me?” The proper approach is, “What can I do for you?”

To build a solid network requires time and commitment. Your efforts will ebb and flow depending on your workload, and if you routinely bite off more than you can chew (guilty as charged), use the ebbs to reconnect and check in on your network.

We live and do business in a connected world. You either reside inside the circle of connectivity or outside of it. Networking is a long-term strategy for expanding your circle and your perspective while shrinking the world around you. Start by showing up; but as with anything worthwhile, practice is the only thing that makes perfect if you want to harness the magic of networking.